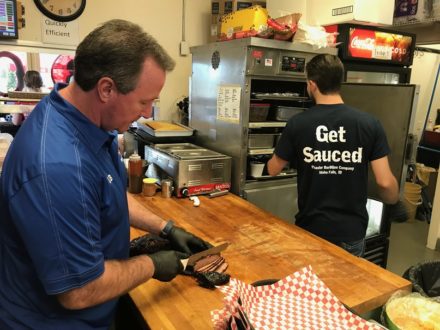 From a hobby to growing BBQ business, success is found in Idaho Falls

“The consultants played a key role in helping me think through growth strategies.” – Owner Rob Harding

Rob Harding spent 25 years in healthcare administration. He turned his love of good BBQ into a hobby, then into a thriving business. While attending a wedding reception catered by Rob, his ribs received rave reviews from guests of the wedding, who happened to be judges from the Memphis of May International BBQ contest.
He began entering BBQ competitions in 2008. After winning many awards, he opened an Idaho Falls restaurant in 2012 where they make everything in-house every day and serve high-grade meats cooked low and slow over real wood. This commitment to quality has made Pitmaster BarBQue Company the most awarded BBQ restaurant in Idaho.

Rob came to the SBDC because he needed someone to discuss his current and future business growth in a confidential environment. A second Pitmaster BarBQue location opened in Idaho Falls in July with the hope of further expansion in the future.